...A GP attends her at home and notes that the patient has developed numbness in the saddle area and cold feet in addition to low back pain shooting to the ankles... 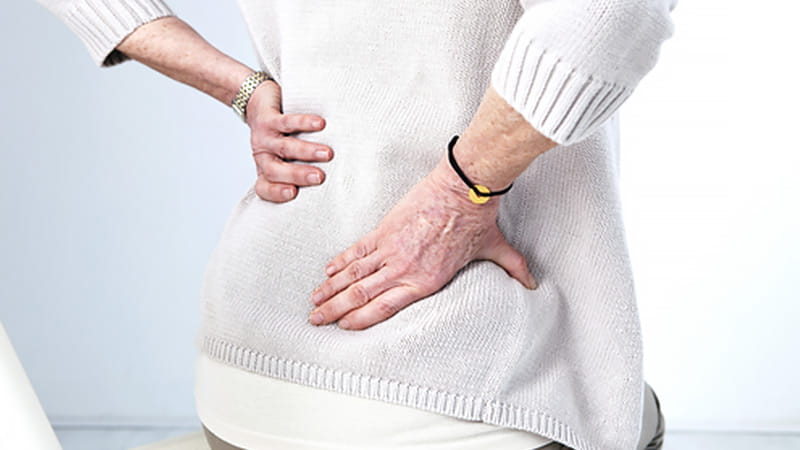 BACKGROUND A 51-year-old woman – Ms T – attends her local surgery complaining of on-going pain in her back and legs.

A year previous she had injured her neck in a skiing accident and had undergone surgery to treat spinal cord compression. Recently at a neurosurgical outpatient clinic she had complained of shooting pains in both legs and difficulty walking and is now on a waiting list for an MRI assessment of her spine.

A GP – Dr L – takes a detailed history and examines the patient and finds no abnormality of sensation or power in the legs and no tenderness over the lumbar spine. The diagnosis is sciatica?/cord compression? and she notes the letter from the neurosurgeon regarding the imminent MRI assessment. Ms T is prescribed ibuprofen and referred for physiotherapy. The management plan concludes: Review if not better.

The physiotherapy brings no improvement and three weeks later Dr L notes a telephone request for pain relief due to "recurrence of backache". More ibuprofen along with co-dydramol is prescribed. Two days later Ms T again phones the surgery and this time requests a home visit. Dr L phones her back and records that the patient complains of severe back pain radiating down both legs to her knees with muscle cramps in her calves and difficulty walking. The patient reports that she is not suffering incontinence or numbness in her legs. The GP prescribes co-cadmol plus diazepam but the next day Ms T phones again to say the pain is so intense she cannot make it to the bathroom.

Dr L visits the patient at home and notes severe back and leg pain, especially on straight-leg raises, but again normal sensation and muscle power on examination. She advises continued analgesia.

Two days later Ms T phones a local out-of-hours service. A GP attends her at home and notes that the patient has developed numbness in the saddle area and cold feet in addition to low back pain shooting to the ankles, cramps in the calves and hip pains. His diagnosis is possible prolapse of a lumbar intervertebral disc. He phones the local hospital and arranges for urgent admission to the orthopaedic unit. Here further examination reveals reduced sensation over the outer aspect of the left leg and foot, absent ankle tendon reflexes and some urinary incontinence.

Later imaging of the spine shows prolapse of the intervertebral disc between the fourth and fifth lumbar vertebrae, confirming a diagnosis of cauda equina syndrome. Emergency surgery is performed that evening. Ms T’s pain is relieved but she suffers complications with residual impairment of sensation and muscle power in the lower limbs, along with impaired bladder and bowel function. She is forced to give up her job as a teaching support assistant at a local primary school.

Five months Dr L receives a letter from solicitors acting on behalf of Ms T claiming clinical negligence in the management her condition. It is alleged that the GP failed to act properly on severe bilateral leg pain present for at least ten weeks. It is stated that the nature, duration and recent increased severity of the pain would have led any competent general practitioner to carry out a detailed examination, including sensation testing in the legs and saddle regions. In doing so the GP would have detected bilateral sensory disturbance and referred the patient for urgent assessment.

ANALYSIS/OUTCOME MDDUS acting on behalf of Dr L commissions expert reports from a primary care physician and a consultant neurosurgeon. Both confirm that back pain radiating down both legs does not necessarily signal nerve root compression but may also be musculoskeletal. Crucial "alarm symptoms" for cauda equina syndrome comprise sensory loss involving the "saddle area" of the perineum between the legs and also reduced sensation of bladder and bowel filling along with incontinence. In her assessment of Mrs T both via phone and in person the GP noted that the patient reported no incontinence or loss of sensation, and no other definite signs of incipient or present cauda equina were noted. Both experts agree that Dr L would have had no call to arrange an urgent referral or seek specialist advice prior to the patient’s later admission to hospital. MDDUS solicitors repudiate the claims against Dr L in a letter of response and the case against the GP is eventually discontinued.