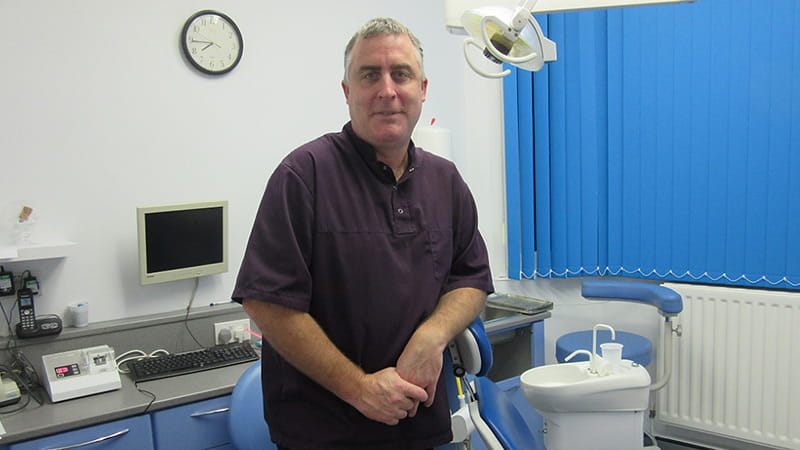 WHEN the working day is over, and the last patient has left the surgery, a queue starts to form outside Nick O’Donovan’s practice.

That’s because the Dewsbury dentist reopens half-an-hour after closing to treat more patients – ones that do not have access to an NHS dentist.

It’s part of a successful pilot, The Real Junk Tooth Project, which has just celebrated its six-month anniversary and now looks set to be extended to other parts of the UK.

In partnership with international dental charity Dentaid, the project offers a pay-what-you-can-afford emergency dental clinic to homeless people and others who struggle to access dental care because of language, distance or low income, during a two-hour drop-in session once a week. Dentists and other staff offer their services on a voluntary basis.

Its launch in December 2015 followed a 2011 study that found 98 per cent of homeless people in the UK experienced dental decay.

For Nick, principal at Dewsbury Dental Centre, it is an opportunity to give something back.

He says: "Dentistry, fortunately or unfortunately, is a business. We’re often accused of putting business before patients. But we are putting patients before business.

"When we go to university as dentists, we might say we do it for the money, but we do it because we want to help people. The money is good, but I have the facilities to help people out-of-hours and volunteering for two hours on a Thursday evening is not too much to ask."

The Real Junk Tooth Project (RJTP) is a spin-off from food waste charity, The Real Junk Food Project, which collects out-of-date supermarket food for homeless people. Staff working on the project found that many of the service users had poor dental care and, often because of dental pain or rotting teeth, couldn’t eat the free food.

That’s when Nick came on board to donate his time, staff and his premises.

To date, the Dentaid-supported RJTP project has treated 115 patients. Of those, the vast majority were male (63 per cent compared to 36 per cent women), aged 45 and over (30 per cent), with most patients visiting the project after struggling to access NHS dental care.

The Dewsbury dentist says he "jumped at the chance" to be involved with the charity that is best known for its work in developing countries: "Dewsbury does have its problems as a town, it has poverty issues, so when someone says to me that people are going to a food charity but cannot eat their dinner because their teeth are hurting them, I want to help.

"We are not offering root canal, we are just offering basic pain relief and we will remove their rotten teeth. And people are very grateful for it. My regular patients think it’s brilliant – not one has asked me ‘why are you doing that?’

"It doesn’t cost much – the biggest cost is the staffing but my nurses have all volunteered their time. I have been amazed by the number of people who have volunteered.

"And the materials cost virtually nothing – take the amount of local anaesthetic I have used during this project, for example, I have probably spent the same on the wife during a night out in Leeds!" he laughs.

The Real Junk Tooth Project is not the first volunteer role that father-of-four Nick has taken on. The experienced dentist has been to Malawi before and is set to return to the southeast African country in April 2017.

He added: "I have seen what it is like where there are no dentists at all when I went to Africa with Warm Heart Malawi. There I had a waiting room of 90-100 people. I pulled out more teeth in a week there than I could have ever imagined."

Nick could not have offered this vital ‘pay as you feel’ service back home if it wasn’t for the support from Sue Baker of Yorkshire and Humber Deanery and the vocational trainees she has provided who also volunteer on the project.

He says: "We have had a couple of VTs volunteering each week since the project started, some are DF1 and some are LDF2. They are always supervised by a VT trainer or an experienced dentist to make sure they are alright and don’t get into any trouble. The foundation dentists have been very good."

Given Dewsbury’s poverty issues, the uptake amongst local people unable to access emergency dental care has been huge. Nick explained: "I finish my regular general practice surgery at 5.30pm, and we start up at six o’clock. They are usually queuing outside the door from 5.45pm.

"Last week we had 10 patients, which was quite busy when they all need extractions – and they usually need more than one tooth out. Most of these patients are not interested in regular check-ups, but don’t want their teeth to hurt them, and they are no less-deserving than the patients I see regularly."

A review of the service shows most patients have either a single (48 per cent) or multiple extractions (13 per cent). One of the first patients to benefit from the scheme was Matthew Phillips who had a wisdom tooth removed. He said he’d been "in pain for months" but couldn’t get an NHS dentist to see him and admitted: "I can’t sleep, it’s affecting my whole life. Without toothache my life will be much better."

Claire Skipper, 29, sought help after pulling her own tooth out with a pair of pliers. She says she’s been unable to find a practice accepting NHS patients, adding: "I dread something going wrong with my teeth again. I can’t afford to go on a private care plan – sometimes we don’t have enough money for the electricity meter. No one in Britain now should have to resort to pulling out their own teeth and it’s fantastic that these dentists care enough to help."

As well as the community benefit, dentists in surrounding areas have benefited by extending their professional network, says Nick: "As dentists, we are often very insular, but now we are all talking to one another a lot more than we would have done. I now know dentists who have been working in the next town for 15 years."

Now, six months after the pilot was launched, Dentaid hopes to extend the scheme to other parts of the country and increase access to emergency dentistry by working with the NHS.

Andy says the scheme is about "breaking down barriers" and enabling more people to access dentistry.

"We want to help the people who are falling through the gaps – to stop them selfmedicating, extracting their own teeth or trying to live with long-term dental pain," he says.

"We know the NHS does a wonderful job but some people are still missing out and they are often those with the greatest dental needs. We’re very excited about the prospects for this project as it moves forward."

To find out more about The Real Junk Tooth Project, including how to volunteer, contact Dentaid on 01794 324249 or email info@dentaid.org