What’s up with WHATSAPP? 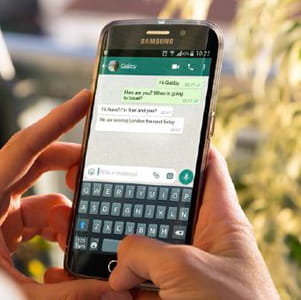 TEN years may seem a lifetime in online technology – but growing a business from zero to over one and a half billion users in a single decade still boggles the mind. Such has been the success of WhatsApp, now a fixture in many people’s lives, both as a one-to-one messaging service and as a ‘social media’ tool through the use of group chats.

WhatsApp was not designed to be used in the workplace but many primary care staff in MDDUS report being included in practice group chats or wider clinical groups, management team groups, admin or nursing groups and also social activity groups. There are also group chats for clinical trainees or local PM groups which cross practice boundaries.

In our experience, these groups are thought (for the most part) to be incredibly useful – allowing team members to interact more freely and encouraging open communication and engagement. However, PMs and partners/principals, as employers, should consider these benefits against the known risks. Consider the following scenarios:

From a management perspective, having a WhatsApp group could be considered invaluable, particularly across larger practices – say to share early absence or practice disruption information or indeed to create a sense of team around social events where some employees are part-time.

Certainly encouraging communication within the team is important, and taking too strict an approach to policing WhatsApp use could end up having a damaging effect on interpersonal relations. So is there anything you should or could be doing to prevent or restrict individuals from using it inappropriately?

In reality, it can be difficult to police online activities within working time, let alone outside practice hours. The best way to approach the issue is to have some reasonable ground rules. An "acceptable use" policy can be integrated with existing policies on social media or mobile phone use in the workplace, and it can be useful to include examples highlighting behaviours which could result in disciplinary action.

If the practice creates a WhatsApp group (for staffing/briefings, etc), it is worth considering whether you or the partners are (even indirectly) encouraging communications about work outside practice hours. Individuals could end up feeling that they are expected to respond to non-urgent, work-related messages when not at work.

There is evidence that, as the use of virtual groups increase, individuals become less guarded and more informal in their communications. The risk here is that 'work' groups may transition into the social sphere where 'banter' arises – to the amusement of some and more than likely not others. It becomes detrimental to the purpose of the group and individuals may be tempted to 'mute' streams of communication intended to pass on necessary or urgent information.

Groups created within the practice (for a work purpose) should have a clear purpose agreed in advance to guide the tone and nature of interactions. An example might be: "this group is to alert staff to absences or other important business continuity changes".

WhatsApp is widely perceived to be secure as it is promoted as "encrypting", but shared images can automatically 'default' to the recipients’ camera roll and perhaps other devices. WhatsApp messages are also easy to access and scroll through if a member of the team leaves their device unlocked in a public environment.

So-called 'funnies' or 'banter' may also be problematic as it can be difficult to determine when a message or image has "crossed the line", even when the intent to be controversial or cause offence is absent. Most social media policies will include a statement making it clear that no offensive material, arguing or heated conversations will be tolerated.

Staff should be encouraged to raise any relevant grievance in person and within the terms of practice policy (rather than in a forum). It should be made clear that any posts including divisive comments or views which could be expected to offend a member of a protected category within the terms of the Equality Act must be avoided and may lead to the practice taking disciplinary action.

As practice manager, you cannot control the actions or words of your individual team members but you can set out clear expectations about what is acceptable within the work environment.

Putting it all together

Finger on the button

Are patients within their rights to video or audio record their consultations with a clinician – covertly or not?