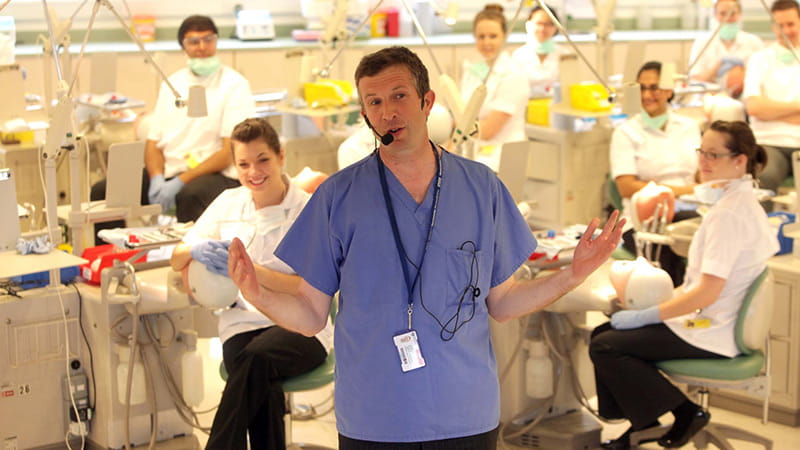 PROFESSOR Jimmy Steele is head of the School of Dental Sciences at Newcastle University and a practising consultant in restorative dentistry with Newcastle Upon Tyne Hospitals NHS Foundation Trust. His main research interest is population oral health and oral health services, including policy and economics.

In 2009 he led the Review of NHS Dental Services in England for the Government and since then has been working with the Department of Health to pilot a new NHS dental contract based on the recommendations.

Why is a new dental contract needed?

Well, there are many reasons and it gets quite complicated but the main one really is that the original NHS contract was set up in 1948 and the dental world is unrecognisably different. Sometimes old things are good but during the intervening (nearly) 70 years oral health right across the UK has been transformed. In 1968, 37 per cent of British adults had complete dentures but by 2009 it was about six per cent, and now it will be even less. Caries which were once universal, whilst now still common, affect the population in a different way. There are hordes of people whose risks are lower, but a minority whose risks are high and are often from a different sector of society from the low-risk people. Periodontal disease is a bigger problem and needs a different strategy of management. The old contract evolved a little but not enough to really meet this need. When a new contract was introduced in England in 2006 it really didn’t solve the problem. If we are to use our scarce resources and our improved clinical evidence and knowledge better, we need to structure the payment system to allow that.

What is the ethos behind the new approach?

The National Health Service is about health, not just about treatment – and dental treatment can be damaging as well as good, of course. The most common dental diseases and conditions are preventable and we will never succeed in treating them away. The ethos is to make sure that the drivers in the system are for dentists to look after the health of their patients rather than only chase treatment targets – in other words to find ways to reward better health. Of course, that needs to be balanced against making sure that the people who most need active and complex treatment can get it.

The NHS is about health, not just about treatment

The NHS dental contract pilots began in 2011. What aspects are working best?

Dentists get the need for prevention, and whether we are talking about dentists who are taking part in the pilots or prototypes or the much larger number still in the old system, there is a general shift towards a different philosophy and the language is often about prevention. For those working in the pilots (and now the prototypes) they seem genuinely to be managing risks rather than chasing UDA (unit of dental activity) targets.

What are proving to be major challenges?

All change is difficult. It requires a new way of thinking and that is really hard. Some of this is about management within the practice. Where the principals have thought it through and planned and made changes from day one and got buy-in from the practices, then it has worked okay, though of course the change was still a challenge. Where that did not happen and people pretended that nothing needed to be done differently – then there have been bigger problems.

How have patients responded?

They actually seemed to respond very well. Some data after a couple of years showed a reduction of moderate periodontal disease by about a third because it had been detected and managed appropriately. Patients seem to like having a conversation about their own oral health in a way that has never happened before. The pilots are just a first run-through though, a dress rehearsal and like any dress rehearsal, a lot has been learned. As we move through prototypes it should be tighter but there is yet more learning required.

Is there any one model of dental remuneration emerging as most effective?

Every variation has been revealing but the move now has been to have a proportion of the contract paid per patient (and if patients are lost to the practice that contract will come down), but that some will pay for aspects of treatment. There are nuances within that but it is too early to tell. My feeling is that it makes sense to set the capitation fee to include caries and periodontal disease management as well as prevention, but to separate out the more complex care into the fee-for-service element because there is a real incentive to get the prevention to work and to think that through. That way you get paid the same but need to do less routine treatment.

How will the new contract be funded and will additional funding be available?

In a world where there is little more money anywhere near the NHS, no-one will put more money in I’m afraid. If we had done this a decade ago we would have been able to oil the wheels I am sure with a bit of resource; now being realistic that will not be the case. However, it makes people a little more imaginative in finding solutions, so what has now been done is to reduce the treatment targets substantially in the prototypes in order to create time for prevention and to try to ensure that treatments go where they are most needed. This has been a major step-change. It is not new money but a huge shift in emphasis and although it needs a bit of ironing out it is, in my view, very important.

How will compliance and quality be ensured?

Ah now, that gets complicated. We will need measures in place that are simple and that show whether a practice is improving health or not. Critical to this is a way of collecting some simple data or indices from all practices with the minimum of effort (for example from some simple data in the IT system). These will need to change from time-to-time but it is important that practices themselves know how they are doing in health outcomes compared to their peers. This is something we have never been very good at, so it is an important part of the process. I have been frustrated that this has not been done as well to date as it should have been because there have been so many things to do that have distracted efforts.

How did you get involved in reforming dental practice?

Well, it was never intended! I knew all about the population trends in disease which were so dramatic and was happy to comment on that, which led naturally into how we might need to manage services differently. I got asked to lead the review of NHS dentistry in England at the back end of 2008 I think because I had said quite a lot up to that point. It was really challenging but ultimately reasonably well received at the time, so I was asked to continue to have input. What you realise is that recommendations and ideas are easy. Implementation is incredibly complicated. I get a bit frustrated now when people complain about how we should just change this or change that – changing an entire national system is fabulously complex. I think sometimes people think that I make the decisions, but I really do not. Civil servants and their teams on behalf of politicians and the NHS bureaucrats make the decisions. Maintaining continuity across two elections has been a particular challenge.

What do you do with the rest of your time (little of it there no doubt is)?

Well, I used to be a very good birder (I found the UK’s second ever black-faced bunting in a hedge near the sea in Northumberland and lots of other interesting things) but am not as good as I used to be, largely as I have less time. But in September and October I become obsessional about migration and wind direction. My best find this year as I write this was a Terek sandpiper in north Northumberland in July and if anyone knows about birds they can make a judgement about where that sits in the rare bird pantheon. I did nine years on the British Birds Rarities Committee (until about 2006 I think) and am now on the British Ornithologists Union Records Committee so every now and again I find myself spending a day debating redpoll taxonomy or puffin wing lengths or something – it is a different planet. I also catch lobsters (about 22 last season – very tasty) and cook seafood and gave a couple of courses last summer. So yes, I keep ticking over.