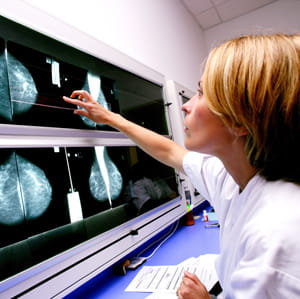 BREAST cancer screening programmes in the UK face some significant challenges in coming years – even when discounting the monumental ongoing disruption in health services consequent to COVID-19.

In any normal year, more than two million women undergo breast screening in the UK via mammography, which is estimated to save around 1,300 lives. Demand is increasing yet workforce modelling conducted by the Royal College of Radiologists (RCR) in 2019 suggests the UK is short of at least 1,876 radiologists and nine per cent of hospital posts for breast radiologists are unfilled. Such shortages lead to backlogs in interpreting diagnostic imaging and thus delays in diagnoses. Recent developments in artificial intelligence (AI) are now showing promise in easing the workload of breast radiologists and improving the time taken to diagnose and refer patients.

In January of this year, a paper was published in the journal Nature from an international research team who analysed an AI system that can “read” mammogram images and identify breast cancer with greater accuracy than radiologists.

Developers from Google and its UK-based AI company DeepMind worked in collaboration with clinical researchers from Cancer Research UK Imperial Centre, Northwestern University and Royal Surrey County Hospital to test the system using two historical datasets from the UK and the US, with the AI predictions compared to historical decisions made in real diagnostic settings.

The UK dataset comprised mammograms collected from 25,856 women between 2012 and 2015 at two screening centres in England. Out of these, 785 women had a biopsy and 414 women were diagnosed with cancer within 39 months of imaging.

Breast screening in the NHS involves two radiologists who analyse each scan looking for abnormalities which may be cancerous and then referring these patients for further assessment or biopsy.

Presented with the anonymised UK images, the AI model was found to be as good as the current double-reading system of two doctors, with a 1.2 per cent reduction in false positives and 2.7 per cent reduction in false negatives. The researchers also conducted a simulation in which a scan would only be passed on to a second reader if there was disagreement between the first reader and the AI. They concluded that using the model in this way could reduce the workload of second readers by as much as 88 per cent, allowing patients to be assessed in a shorter timeframe.

Results using the US data were even more impressive. This consisted of 3,097 mammograms taken in one academic medical centre, out of which 1,511 women were biopsied with 686 diagnosed with cancer within 27 months of imaging. Compared to review by a single radiologist, the algorithm demonstrated a 5.7 per cent reduction in false positives and 9.4 per cent reduction in false negatives. An independent study involving six radiologists also found that the AI model outperformed human diagnosticians.

The so-called “deep-learning algorithm” is the product of recent technological developments in computer vision that allow analysis of large visual datasets. Deep learning utilises artificial neural networks and algorithms inspired by the human brain, in which tasks are endlessly repeated and tweaked each time to improve outcomes. The breast screening algorithm was based on one Google developed for detecting diabetic retinopathy.

“Reading mammograms is the perfect problem for machine learning and AI,” said Dr Mozziyar Etemadi, research assistant and professor of anesthesiology and biomedical engineering at Northwestern University and one of the paper’s co-authors. He told Time magazine: “AI excels when it has to do the same task over and over again, and has to find the one thing that might appear one time out of 10,000. But I honestly did not expect it to work this much better [than doctors]. I was surprised.”

Dr Etemadi and other experts do not see the AI system as a replacement for radiologists but more as a tireless digital assistant, allowing for a “first pass of evaluations” that can be supplemented with human clinical expertise that considers other factors, such as lifestyle and a family history of cancer.

Caroline Rubin, RCR vice president for clinical radiology, agrees: “AI programmes will not solve the human staffing crisis—as radiologists and imaging teams do far more than just look at scans—but they will undoubtedly help by acting as a second pair of eyes and a safety net.

“We look forward to when AI can be used in practice, but it is a competitive market for developers and these programmes will need to be rigorously tested and regulated first. The next step for promising products is for them to be used in clinical trials, evaluated in practice, and used on patients screened in real time, a process that will need to be overseen by the UK public health agencies that have overall responsibility for the breast screening programmes.”

Professor Ara Darzi, one of the authors of the paper and director of the Cancer Research UK Imperial Centre, said: “Screening programmes remain one of the best tools at our disposal for catching cancer early and improving outcomes for patients, but many challenges remain – not least the current volume of images radiologists must review.

“While these findings are not directly from the clinic, they are very encouraging, and they offer clear insights into how this valuable technology could be used in real life. “There will of course be a number of challenges to address before AI could be implemented in mammography screening programmes around the world, but the potential for improving healthcare and helping patients is enormous.”

Jim Killgore is a publications editor at MDDUS